One of my favourite literary genres is travel reports by chic English ladies in really rough areas. Among some of the best works in this genre, the 1929 book “an English Lady in Chinese Turkestan” really stands out (not in the last place because of its wonderfully straightforward title). As one might expect, this book relates the story of an English lady spending time in Chinese Turkestan. The lady in question is Mrs. Macartney, who left England on the 6th of October 1898 to live in the ancient Northern Silk Route City Kashgar, to live by the side of her husband, who worked at the English Consulate in the city (and who sis eventually promoted to Consul General in 1910).

What I particularly like about this book is that Lady Macartney manages to build a comfortable English upper middle class household in such a remote place. The family breakfasts with buttered toast, and she even manages to serve cake, despite quite some culinary difficulties:
“Cooking in Kashgar meant a great deal more work than it does at home, for everything must be prepared from the very beginning. To make a cake, for instance, cream must be bought, and made into butter; flour sifted and dried, sugar pounded in a mortar and sifted; almonds shelled, blanched and pounded, etc., before the real cake making began”.
Despite the conditions that are unarguably rather averse to English cuisine, she doesn't let her standards fall (I would probably desist blanching almonds at the first sight of difficulty), and after a while it is decided to stop buying cream at the store altogether, and just buy some cows for the sake of better quality milk:
“We very soon found that we must keep a cow of our own, for the milk from the bazaar had such an unpleasant taste. The natives would mix sheep's milk with cow's, and the horrible flavour of the sheep could not be covered by the strongest tea or coffee.”
Even with the added care of keeping cows (or rather: having more servants to care for the cows), she keeps the household going.

Next to the focus on housekeeping difficulties, another interesting part of the book is the description she gives of the Western social circle in Kashgar. The Brits, Americans, Swedes and Dutch that live in Kashgar would probably not have formed a close circle of friends had they lived in a Western city; the high diplomatic officials mingle with people of considerably lower social standing, such as the Dutch Roman-Catholic priest Hendricks (“a quaint figure, dressed in a dirty Chinese coat and dilapidated black clerical hat”) who lives in the rougher parts of Kashgar and is one of the closest friends of the Macartney family. For however large social differences may seem in the West; these turn out to be quite small indeed when surrounded by many people of a culture so very different from your own.

And these different cultures form a large part of the book as well; for, being the wife of a high ranking diplomatic official, Lady Macartney frequently has to entertain Russian and Chinese guests, and likewise attend their social gatherings. With which she has considerable difficulty; the Russians are described as rather prone to drinking at such events (“By the time the dinner was halfway through, many of the guests were decidedly lively (…) and before it was over, some had disappeared beneath the table”), and she often brings a jar of mustard to Chinese dinners to cover the taste of some of the more advanced dishes. The interactions with the 'natives' from the area (the Kirgiz, Uyghur, Tibetans, Ladaki et cetera) are generally limited to the ones in the employ as servants.

This whole social setting of upper middle class life has a certain romantic appeal (though I'm not certain why exactly), and this is further accentuated by the occasional 'wind in the willows' style of prose:
“At night, the garden was filled with exquisite music that, at first, puzzled me until I found out that it came from swarms of frogs hopping all over the paths. They were fascinating to watch. Mr. Frog hopped along, singing out in a tenor voice: “Diddle-diddle”, and from a distance a treble voice answered: “Diddle, diddle, diddle”. Away hopped the gentleman in the direction of the voice, and towards him hopped the lady. They met and sat side by side singing a duet in thirds, their throats swelling out like tiny balloons.”

Apart from this romanticism, Lady Macartney gives an interesting portrayal of Central Asia in the 19th and early 20th century. She relates the family's experiences during the Xinhai Revolution (1911 – 1912), which resulted in the overthrow of Chinese Imperial rule. This is a particularly unnerving event, and Lady Macartney's account gives an insight in the people who were victims of this revolution; “the poor old Tao-tai (…), his wife and the Hsien-Kuan”, and many other members of the old government (along with their families) who were murdered.

In one of the first chapters, Lady Macartney explains the British interests in Chinese Turkestan; which at the time of her arrival lie mainly in maintaining it as a neutral buffer state against expansionism by the Russian Empire, thus protecting British India. This fear of Russian expansionism was also a motivation for the British Expedition to Tibet (1903 - 1904), which was led by Captain Younghusband (later to become Lieutenant Colonel Sir Francis Younghusband), in whose company Mr. Macartney first arrived in Kashgar. This expedition is one marked by several massacres of poorly armed Tibetan soldiers at the hands (or rather: the modern machine guns) of the British, in perceived defence of an empire begotten in the first place through cold blooded murder. Lady Macartney's rather businesslike description of these politics reminds one of the dark side of the romantic appeal of English upper middle class life in Central Asia, and by extension that nostalgia for the colonies, the empire or any tempo doeloe is always tainted by inequality and murder.

Despite the sinister thought of the British empire in the background, the book has really made me want to visit Kashgar. And, who knows, when there I might even blanch some almonds.
Posted by Unknown at 05:18 No comments:

About two years ago I was studying for a practical in human anatomy. However, the material I had to read consisted of a really large illustrated pdf. Now, I generally appreciate when you don't have to buy some really expensive textbook for a course (which I often don't really look into again after having done the exam), but I don't particularly like to read from a computer screen, especially if it's something that takes several hours, and printing out this massive file didn't seem like such a good idea since my university had just started making us pay 5 cents per printed sheet. So I decided to visit my grandfather to see whether he had a good textbook; he used to be a medical doctor, and I assumed that our anatomy hadn't really changed in the last 60-something years.

Having arrived, my grandfather lent me a really nice copy of Henry Gray's anatomy of the human body, but he also had something far cooler; a set of 19th century French anatomic lithographs by Jules Germain Cloquet, with the fancy title:


On the frontpage there is a typical 19th century French show-offy list of Doctor Cloquet's scientific activities:

The lithographs are of superb quality, and with some really sweet 19th century touches; such as the sideburns of this fine gentleman with a split-open skull:

My grandfather talked me through the different drawings explaining nearly half of toutes les parties du corps humain. As a result, the practical went really well.

I'll post some more of the lithographs later on, but I want to close with a picture of a young man with a really nice coiffure, despite his neck being in a rather deplorable condition: 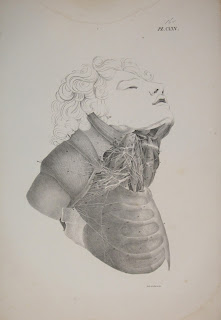 I recently visited the POWER/Prix Pictet exhibition in the small photography museum Huis Marseille in Amsterdam. The exhibition features some great photographs;

My personal favourite is a photograph by Daniel Beltrá of the BP oil spill in the Gulf of Mexico. The interplay of the deep blue colour of the ocean and the rainbow palette of the floating oil is beautiful. The water-oil interface creates some really interesting demarcated lines, which are accentuated by the curly lines of the slipstream of a ship.

Another nice part of the exhibition is a series of several photographs by Guy Tillim on the 2006 elections in Congo-Kinshasa. The photographs are of large outdoor rallies, but they retain an intimate air despite the hectic and crowded environment. Some of the crowds contain shots of faces that would do well as individual portraits, and all photographs give off a feeling of what down-town Kinshasa must be like – the heat and humidity leaving sweat droplets on your neck that mingle with the omnipresent dust, the dust that leaves a thin yellowish layer on your three-piece suit.

The winner of the 2012 Prix Pictet is Luc Delahaye, his best photograph exhibited is 'Les Pillards', which shows five pillagers, running away from something that is not in the picture (possibly the police?), in the aftermath of the 2010 earthquake in Haiti. It is the facial expression of the pillagers really makes this picture what it is, so it is at its best when seen in large (as a postcard it wasn't as good).

The USSR-born photographer Rena Effendi deserves some mention here for her still-lifes taken in the area surrounding Chernobyl. I particularly liked her photographs of foodstuffs in the rustic kitchens of the people that have moved back into the area. Mrs. Effendi has a good eye for colour compositions, and the result has a picturesque quality.

There are, however, there are some weak points. Firstly, the exhibition is really quite small; which is to be expected since the museum isn't particularly big, but at the time of my visit, part of the museum was being rebuilt (or refurbished, I'm not sure), so it was even smaller than normal. A part of the exhibition that wasn't too good consisted of a bunch of motion pictures in the garden house of the museum; their simultaneously played soundtrack created a cacophony, and the motion pictures themselves weren't interesting visually.

Despite this, there's some really nice things to be seen, and if you're a student (entry only costs 3 Euros) or are the proud owner of a Museumkaart or an 'I Amsterdam City card' (free entry), you really should visit the museum.

I can't wait for the next exhibition in Huis Marseille starting the 22nd of June, called 'Walker Evans / Decade by Decade'.
Posted by Unknown at 06:35 No comments: